This is an outstanding webinar that focused on lead generation.  Between everyone who participated, there were so many great tactics shared on here!

Brian Pitcher, founder of the Pitcher Group and MASS Negotiations, is an elite affiliate and top-producing agent at Prudential Real Estate in Salt Lake City, Utah. Brian began his real estate career in 2003 and immediately earned a cutting-edge reputation. Anticipating the housing crash, Brian set out to become one of the first agents in Salt Lake to build his career around short sales and foreclosures. Because of his knowledge, he has been a short sale coach and mentor for other agents around the country, inside and outside of Keller Williams International and Prudential Real Estate. This awarded Brian the Top Producing Individual in Utah for Keller Williams in 2009.

His impeccable reputation for high close ratios on short sales immediately grabbed the attention of prestigious top selling individuals around the country. Brian has been invited to participate on many short sale panels in various parts of the country with many different real estate groups. With such interest in his expertise, Brian has taught many courses to local and international agents and has even penned a book, “The Truth About Short Sales, Loan Modification and Foreclosures.” He is ready to print his second book, which is, “Should I Stay or Should I Go? A Homeowners Guide to the Housing Mess.”

Brian lives in West Jordan, Utah with his wife and two daughters. A few interesting facts about Brian that most people don’t know is that he was a cheerleader in college with the University of Utah and performed with the Utah Jazz Stunt Team and was also sponsored by Project 57, a snowboarding company out of Utah.

Mike got his start in Real Estate in 2005 at the young age of 26. He immediately established himself as a top producer in the Jacksonville, FL market, moving into the top 1% of agents his first year in the business. As the Florida housing market became depressed in 2007, Mike took advantage of the situation and quickly learned the short sale business. In no time he amassed an inventory of over 100 short sale listings and quickly established himself as one of the top short sale agents in the State of Florida. As his online presence grew, homeowners from other parts of Florida began contacting him for guidance with a short sale and to be connected with a local short sale agent.

Seeing a need for home owners in hardship to be connected to local short sale experts on a national level, Mike founded The Short Sale Specialist Network in October 2008. 2010 marked a season of growth for the company with the launch of their online short sale agent social networking site as well as the Certified Short Sale Guide training designation. The Short Sale Specialist Network has evolved into an organization of over 12,000 agents, manages a portfolio of over 40 short sale related consumer websites, and has directly assisted tens of thousands of home owners with a short sale. 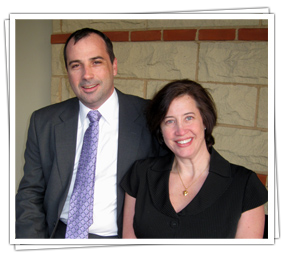 Dan and Traci Rochon are owners of Dan and Traci & Consultants with Keller Williams Realty which is a full-service brokerage that helps clients in the Washington DC metro region buy and sell properties in all price ranges. They specialize in short sale transactions and foreclosures. In 2010, Dan and Traci closed 102 transactions. Because of their extensive experience, owners Dan and Traci Rochon are frequent speakers and are often quoted in media stories dealing with difficulties in the current real estate market. They have appeared on the NBC Nightly News, the Today Show, CNBC, the Washington Post, The Washington Examiner, local radio, and more speaking about the challenges of the real estate market.

Dan and Traci live in Alexandria, VA with their young daughter, Maggie. In addition to owning the sales team Dan and Traci & Consultants, the Rochons are also investors in Keller Williams Realty in Alexandria – Kingstowne, VA where Dan is the Operating Principal.